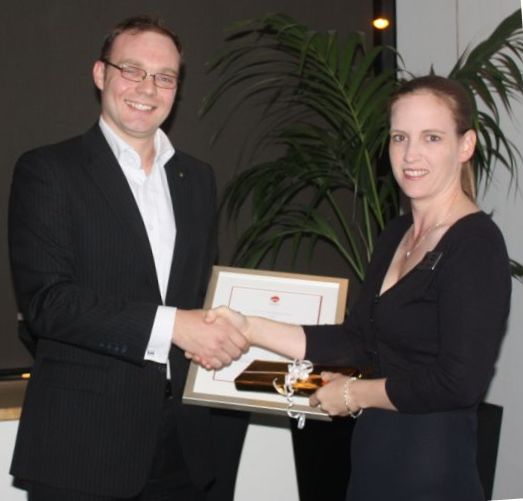 The Award is conferred to recognise the achievement and contribution of a young mechanical engineer, technologist or associate to the profession of Mechanical Engineering; specifically the level to which the nominee has enhanced the public image of mechanical engineering and/or their contribution to the volunteer activities of Engineers Australia and the excellence and commitment shown to their Professional Development within the discipline.

The 2010 Award was presented to Cristian Birzer. Cristian is an inspirational young engineer working as a Senior Research Associate in the School of Mechanical Engineering and the Centre for Energy Technology at the University of Adelaide with some of the non commercially sensitive findings from his research published in international conferences and peer reviewed journals.

Cristian is also a member of the Centre for Energy Technology Steering Committee and was coordinator of the Fluid Mechanics, Energy and Combustion (FMEC) Research group before it was subsumed into the centre. A member of the Australian Army Reserves since 1995 Cristian has also been the Young Engineering Australia Vice Chairperson (SA Division in 2001, 2009/2010) and Chairperson in 2002 as well as being a  volunteer speaker for Advantage SA since 2009 talking to South Australian Primary and Secondary School students about careers in Engineering and being part of the Army Reserves.

The Award consists of a framed certificate & a boxed vernier caliper and was officially presented to Cristian at an Engineers Australia Dinner on April 29 in Melbourne. The award was presented on behalf of Applidyne by Paula West the Deputy Chair of the BCME and a Young Engineers Australia representative .